On Saturday, August 12, violence erupted on the streets of Charlottesville, Virginia as counter-protesters clashed with the Unite the Right rally, supposedly organized to protest the removal of a statue of Confederate General Robert E. Lee. Now three people are dead with many more injured or arrested.
Far from uniting the right, this event led to stark division within Republican leadership as some GOP leaders strongly condemned President Trump for comments about violence and bigotry "on all sides." Though he later denounced groups such as the KKK and neo-Nazis, he later doubled down on his belief that there were "very fine people" on both sides of this protest. He then took to Twitter expressing sadness at seeing more Confederate monuments removed from public spaces.
There seems to be some misunderstanding of what Unite the Right actually was. This was not a peaceful protest that got out of hand because a few hooligans showed up. This was organized by known members of white supremacist organizations. This was a racist rally plain and simple. There is no room for ambiguity about it.
If any "very fine people" showed up to this rally, then I can only assume that they misunderstood what it was about and then immediately joined the counter-protesters or left the area.
I don't believe for one second that people at the rally had any care for the historical value of the statue of Robert E. Lee. If they did, they wouldn't have been carrying Nazi flags and they would've known that the statue was going to be moved to a museum, not destroyed.
The Civil War is part of our history and heritage. When I was in the Army, I actually saw plaques that honored Civil War soldiers on both sides. The Civil War was fought over states' rights ... to continue slavery. Anyone telling you it wasn't about slavery is simply wrong or lying ... just like Donald Trump is wrong or lying when he says there were fine people marching alongside swastikas and Klan hoods. The average rank and file soldiers of the Confederacy deserve to be memorialized, not as heroes, but as casualties. Most of those men who went to battle for their homes were not slave owners.
Rich people owned slaves. And, as we all know, the rich don't fight in wars. They start wars. It's up to the rest of us to do the killing and dying.
Lyndon B. Johnson said, "If you can convince the lowest white man he's better than the best colored man, he won't notice you're picking his pockets. Hell, give him somebody to look down on, and he'll empty his pockets for you.
This strategy has been working for years.
There is hope that has emerged from all this, though. Many Republican leaders, including Mitt Romney and John McCain, have broken ranks with Trump and called for unambiguous condemnation of the racist motivations behind Unite the Right. Perhaps with more competent leadership, the right can truly unite under the banner of what is truly right.

A co-worker told me that it was just seven days to freedom to kick the smoking addiction. The seven days is what it should take to get over the habit. I take comfort in the fact that I'm at the hardest part at day two. I went for a jog this morning. It's important to keep up an exercise routine during this detox, because I spent a lot of time at my desk stuffing candy in my face. I also spent a little time walking on the trail behind the office.
I have such a love-hate relationship with tobacco. Quitting feels like a divorce. I know the relationship was bad, and I know I'm better without it. But, I also miss the companionship of my faithful friend and comforter that has been there for me for about 15 years.
I've caught myself inhaling sharply, breathing deeply, missing the smoke.
On the other hand, I'm not emptying my wallet to smell like a dumpster fire.

Three days without a smoke ...
I can tell you one thing for sure. Smoking is an addiction, complete with withdrawal symptoms. It is not a dirty habit or a frivolous luxury. It is drug addiction. Quitting drinking was nowhere near as painful. Not even close.
I'm walking a lot, so that's good. I've also been munching snacks and candy a lot, so I hope that will counteract too much weight gain.
Maybe it's time for the culture to shift. Instead of writers being known for drinking, smoking, drugs and suicide, why not have a new generation of writers known for having a tenacity for life? I'd love to see writers become stereotyped for being notoriously straight-edged, clean-living people. Let us be insightful due to a lack of clouding our senses, not because of it. We are the ones who should have that hyper-connection to reality, not floating along on an insanity-inducing brain fog.

Four Days In ...
The major jitters have tapered off a little, but I'm still munching candy like a kid on November 1st.
never again should you wonder how a homeless person can afford cigarettes. Never again need you wonder how a single mother on welfare can afford cigarettes. I have the answer.
They can afford it the same way a junky can afford the fix, by any means necessary. Go long enough without food or water and some beastly part of your brain will push through and tell you to beg, borrow, steal or bash someone's head in with a rock if that's what it takes to survive.
And that's the part of your brain that gets reprogrammed with an addiction. It deprives you of choice and tells you that you need it as much as you need the air you breathe.

One week
The physiological enslavement has ended. I've shaken the curse, but not the obsession. I still feel it from time to time when I'm driving along with a cup of coffee, when I see someone else enjoying a good long drag.
I realize just how much the pace of life was set by the cigarette clock. Now I must establish a different routine.
I'm going to join a gym tomorrow to counteract all those sugary treats I consumed as a smoking substitute. Last week, I tried not to worry about that. I figured if I gained a few pounds, it's worth it to kick the smoking habit. I can focus on fitness once the chain is broken.
It's now time to take my health seriously. I'm 37. I don't have any children yet, but I want to. 40 is creeping up on me, that dreaded halfway point where there may be fewer days ahead than there are behind.
Well, I still have lots to do, so I'd better get to it.
Posted by Skeeter McDiesel at 5:56 AM No comments:

Newspapers are the worst?

CareerCast has been annually compiling a list of the 200 worst jobs, and newspaper reporter has made the list several years in a row. Apparently, they use a number of criteria to determine this. Factors include pay, upward mobility, stress and safety risks.

Other worst jobs included logger and enlisted military personnel. Weird. I've been in the military and certainly wouldn't call it one of my worst experiences. It beats the hell out of retail with a 10-foot pole, that's for sure.
I wasn't sure why newspaper reporter made the list, but some other bloggers speculated. They cited stress of deadlines, hectic environment and mainly the fact that the industry is struggling to stay afloat.
Okay, that last one makes sense.
But stress? Nah.
My job is fun. As a reporter, my job is to go learn interesting stuff and then tell everyone about it. I have an office, but I frequently leave to go chase a story or just to go look for a story. Yeah, it's pretty chill.
The money isn't great. You don't get rich, but it's far from minimum wage.
I've even heard it described as a dead-end job, but what is that? What if it's the job you want? Doesn't that make it less of a dead-end and more of a cul-de-sac? What is a dead end if it's right where you want to be?
My grandfather, Forrest Miller, was a sports writer for the South Bend Tribune for his entire career ... and actually, even longer. After he retired, he continued to freelance until he died. That's someone who definitely found his calling in life.
People who don't like journalism don't go into journalism, and those who do, don't stay. There's no promise of fortune and fame. There is nothing to entice someone who doesn't have a sincere interest in the craft. There is no reason to be over-stressed. If you want out, you simply stop.
I know, because I did.
I left a newspaper for greener pastures (emphasis on green). I worked a few jobs and even went and earned a barber's license. That was fun, but I never stopped missing my first love.
Two years later, I stepped into another newsroom and smelled the ink and paper. It was like kissing your ex and realize you never really got over her. I'll never leave again of my own free will.
Posted by Skeeter McDiesel at 4:41 AM No comments: 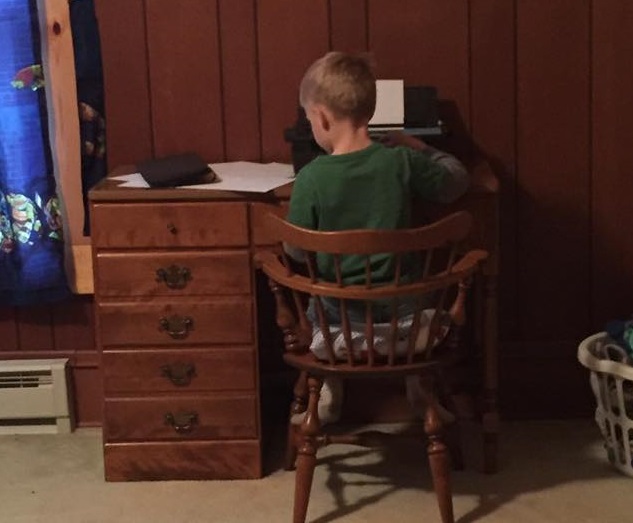 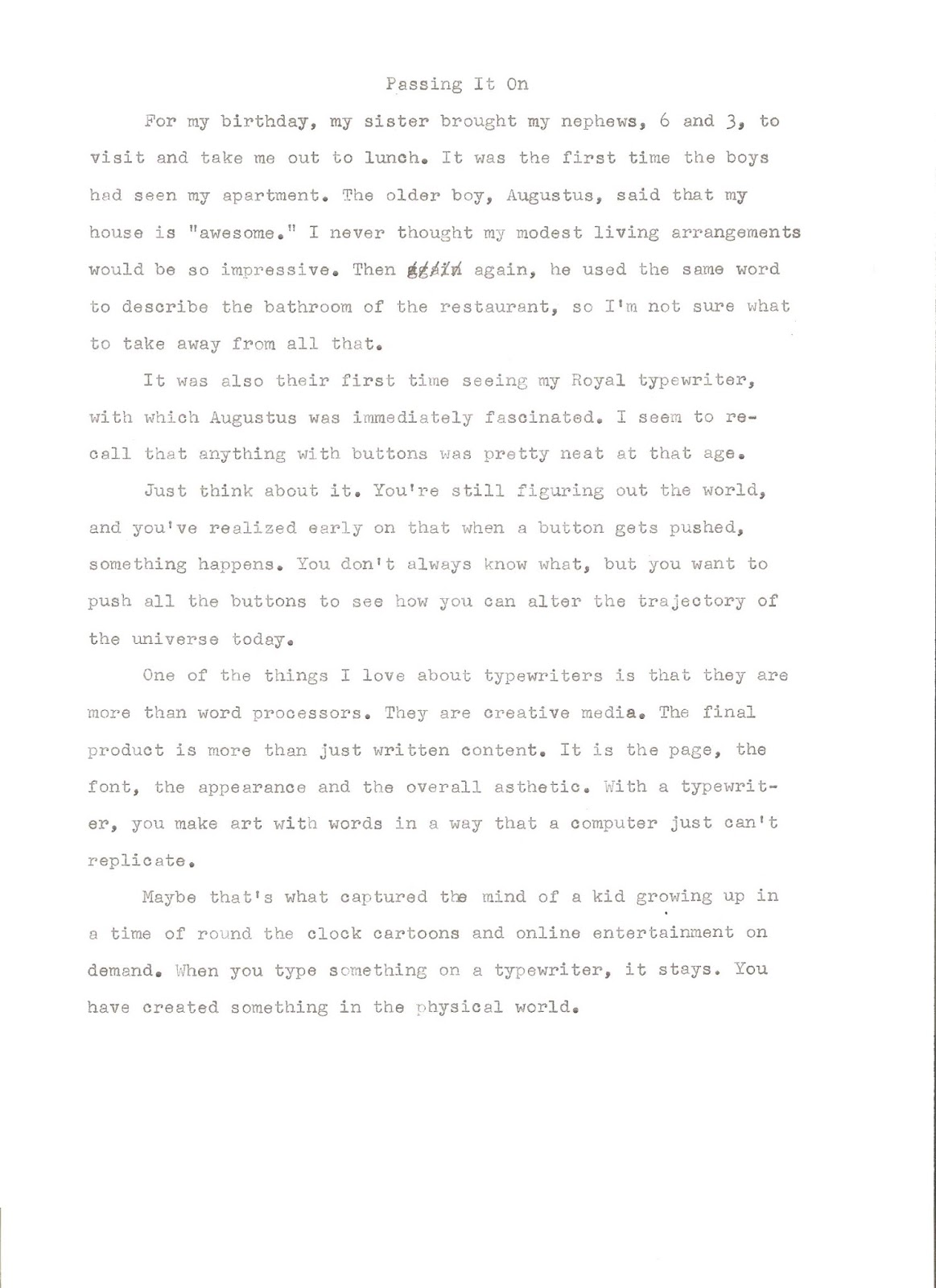 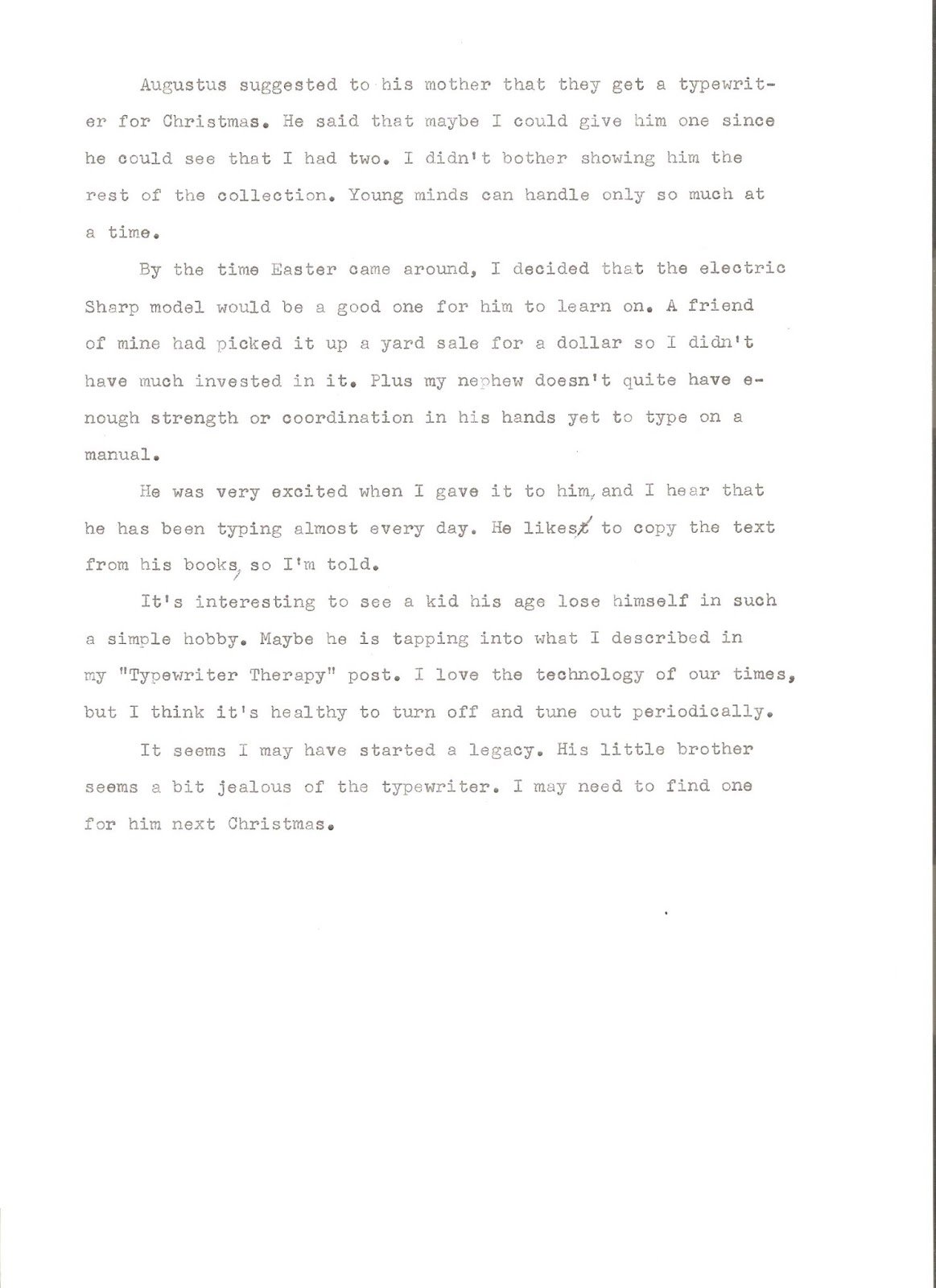 My girlfriend sent me some parchment paper for Christmas, and I thought it might make the type more readable for this blog. Here's a rant about beloved movies that really grind my gears. 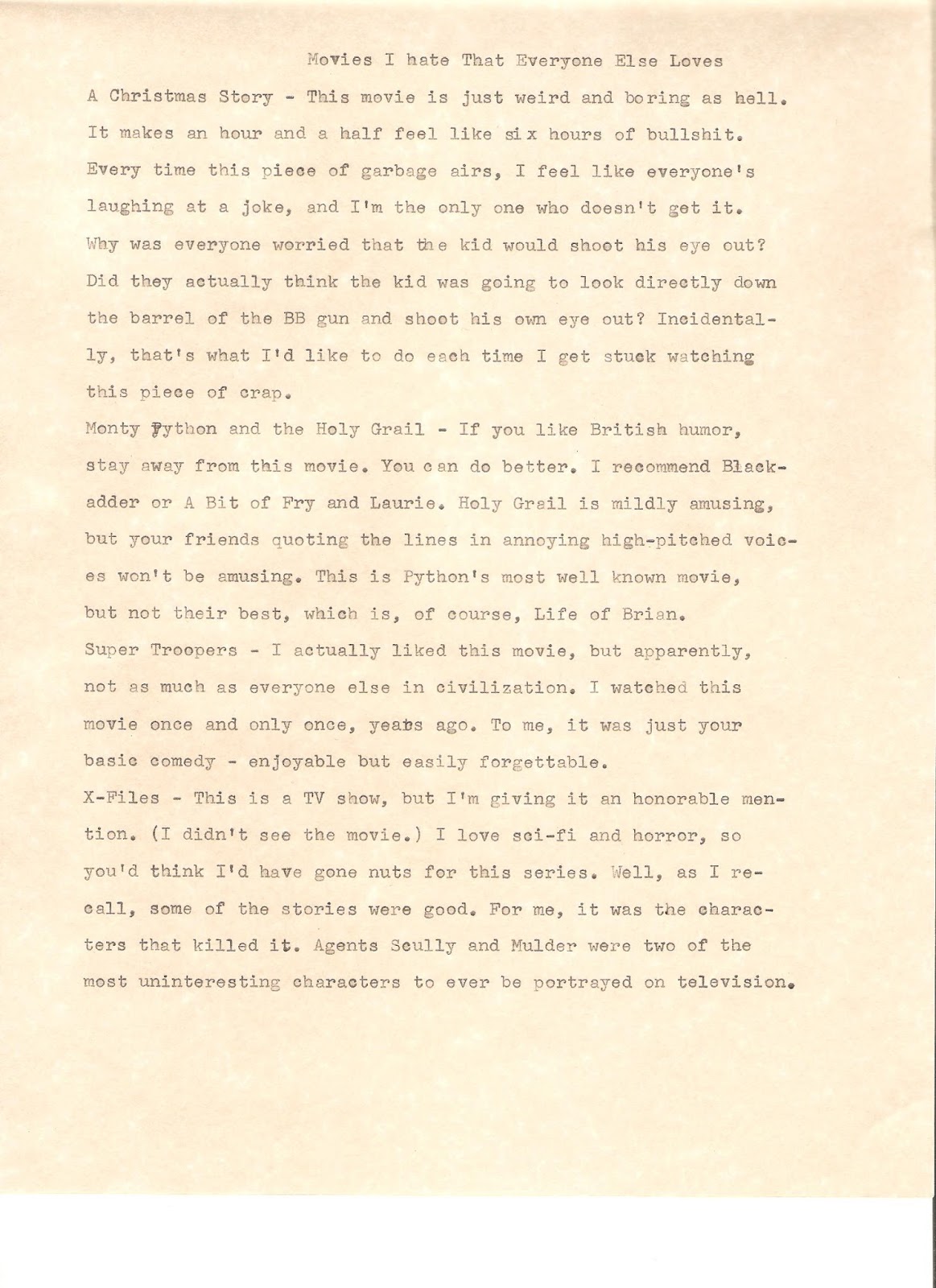 Posted by Skeeter McDiesel at 1:41 PM No comments: 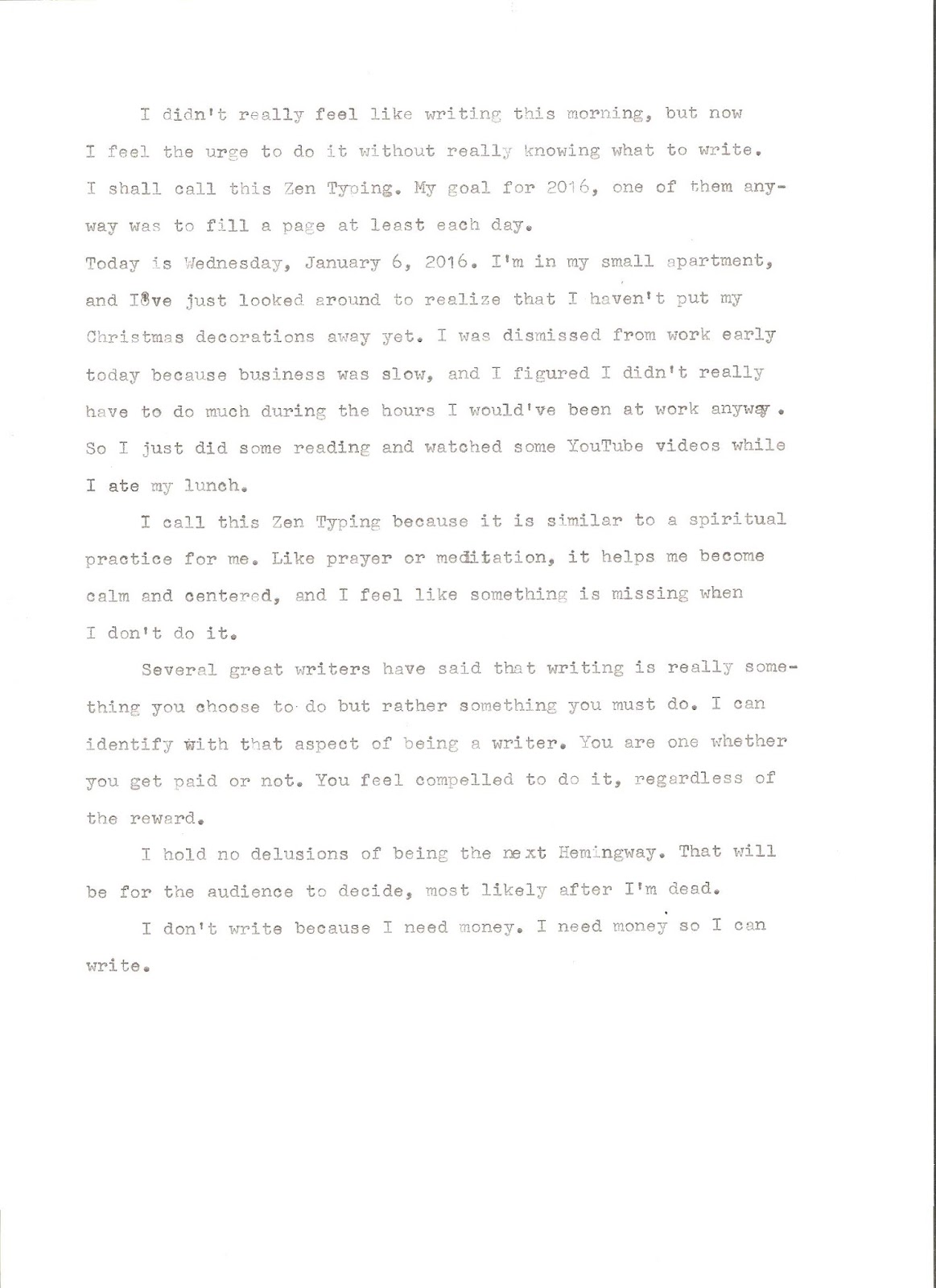 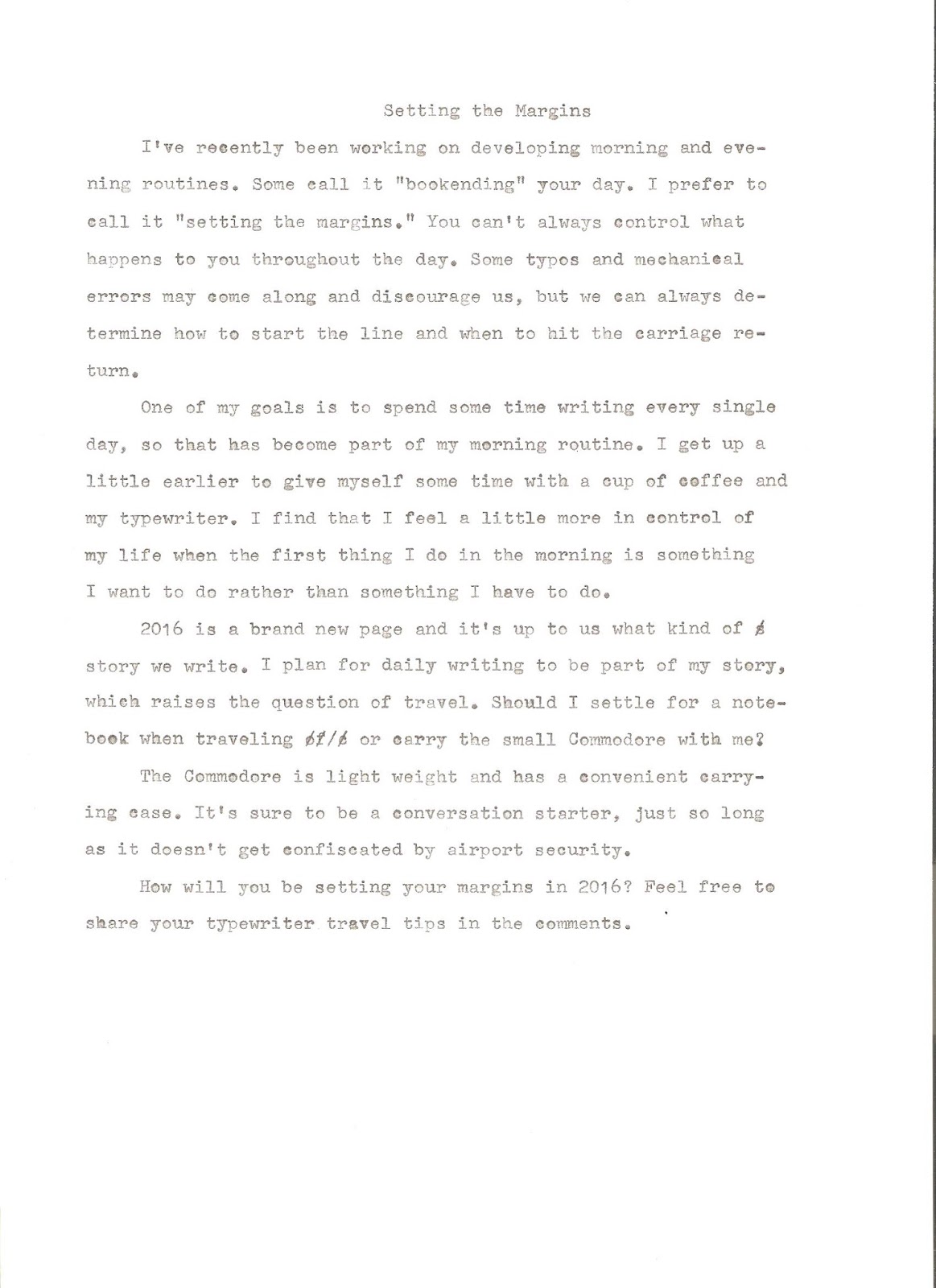